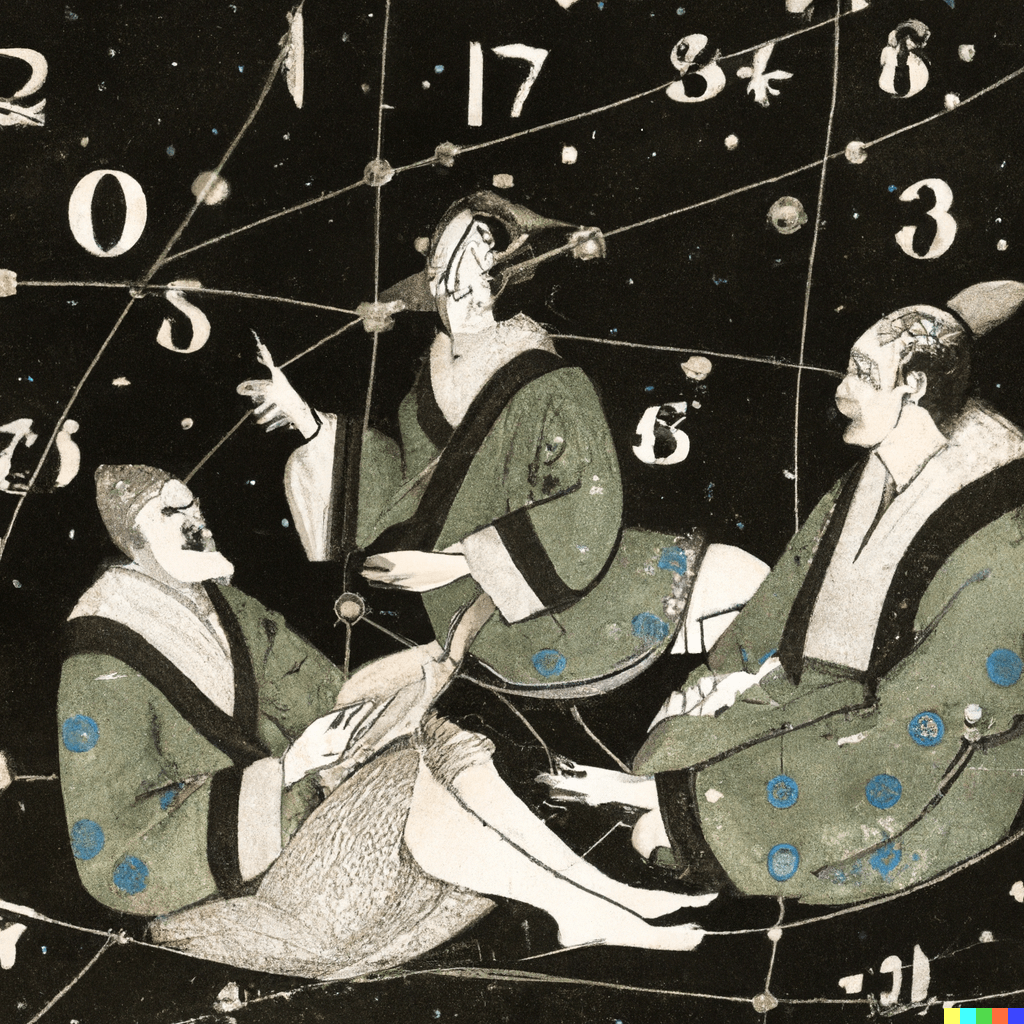 I think you've got more berries than me

math started because someone wondered why his friend had more berries than him.

I wonder what was going on in a prehistoric person's head when he first thought about a way to equally distribute the number of berries he collected in the woods:

"aaaagh, me think woman have more berries than I, me need find way to fix problem."

or something among these lines. I know that it's probably not very historically accurate. still, it's a fun way to think about how humans realised that they needed counting, numbers, math and quantum theory to live an easier life.

it's fascinating how we evolved from making scratches on a bone (which is supposed to date to 150'000 years ago) to the first documented 1 about 20'000 years ago to the complex algorithms that try to explain turbulence.

"let's get more complex", that's what I said to the others.

time passed, and the human mind came up with many questions in all its curiosity and bravery. we've always tried to find a logical explanation for everything, to find a pattern that could help us predict what happens next, to find rules that would explain why things act the way they do and laws that govern how life works.

at first, they weren't too difficult to solve; they might have been something like finding the height of a tree. or something more complex like Fermat's Little Theorem about prime numbers, but still solvable, by hand, so to say, and by hand, I mean something that can be solved (and computed) in a reasonable time frame by one or more humans. I know that I got a little complex on the explanation of what by hand means, but I wanted to stress that, as humanity progresses, it has started facing problems far beyond the computational power of humans.

the first thing that comes to mind when I add complexity to problems is cryptography because we all want to keep our secrets secret... am I right? did you get the wordplay: "secrets secret" no.. well, at least I tried. as I was saying, we (by we, I mean humanity) started using mathematical algorithms to hide sensible information.

the first attempts at hiding something are documented to be about 4000 years old; kudos to the egyptian sculptors for that, even if those weren't really hidden messages, more like attempts at mystery. but they only scaled in complexity. some cryptography had a religious motivation; thus, many encryption algorithms were based on mapping letters, or words, from a text to some books (like the Bible or the Qur'an).

the first page of al-Kindi's manuscript "On Deciphering Cryptographic Messages" contains the first descriptions of crypt-analysis and frequency analysis.

the problem, if I might call it that, with these cryptography attempts was that they were pretty predictable, and once you broke it, they became useless. naturally, some weren't satisfied with that and set on the quest of building the perfect encryption machine. and one guy, Arthur Scherbius, thought: "hmm, I've got all these circuits, pity if they go unused", and that is how Enigma came to exist. (note: this is an oversimplification of how the Enigma was created)

since I mentioned the Enigma, an explanation of what that is might be helpful:

the Enigma machine is a series of electro-mechanical rotor cypher machines developed and used in the early to the mid-twentieth century for commercial and military usage. it was invented at the end of world war I, and early models were used commercially from the early 1920s. its main parts are 3 rotors with criss-cross wiring that move like a clock with each press of a keyboard, then there's the plug-board that's a series of connection wires, the keyboard, and the bulbs that light up and give you the code.

on the outside, it couldn't be simpler:

before I continue; I'll give you a number:

(I know you didn't read the number, you lazy ass. I mean, no offence!)

wanna take a guess at what it even means? yup, that is the total possible "guesses" (combinations) for this machine, and to put it into perspective, it would take you 1 second to check a combination if it's the right one. a team of 10 people would need about 100 billion years to check every combination. the nazis weren't making the problem any easier as they changed the configuration for the Enigma machine. they also used it to send secret messages to each other using the Enigma machine during world war II daily. that made it a challenge to break the code.

breaking the code using pen and paper just wasn't gonna cut it. but, since the "problem" was created using a simple electrical circuit, the problem could be solved by using a little more complex electrical circuit, and that's precisely how two brilliant young mathematicians and theorists thought. Alan Turing and Gordon Welchman understood that they needed something way faster and more effective than a human to solve a problem created by a machine. they came up with La Bombe - an Enigma codebreaker. this was a set of Enigma machines wired together to continuously crunch possibilities and stop when they found a match.

this might be one of the first and most known cases where we designed a machine that would solve problems, albeit this one could solve only one: cracking the Enigma code; we might call it a computer.

but this wasn't the first electro-mechanical computer; the Z1 was. it was created by german Konrad Zuse in his parent's living room in about 1936. the difference between Alan and Welchman's machine and Zuse's one is that the latter was somewhat programmable, meaning that you could set it differently to solve different problems. however, unfortunately, it still couldn't browse Reddit on it, so it wasn't a perfect programmable computer.

driven by the Turing machine principle, a theory proposed by, you guessed it, Alan Turing in 1936, a "machine was a device that printed symbols on paper tape in a manner that emulated a person following a series of logical instructions. Without these fundamentals, we wouldn't have the computers we use today." (basically, the device you're using to read this. hi, btw!) a lot more designs and implementations for a computer were tried.

each iteration was better, stronger, faster, and smaller.

Pamela McCorduck, an american writer on the philosophical significance of artificial intelligence, said that this desire is "an ancient wish to forge the gods." which I find very accurate. so another motive that scientists tried to develop computers was to create artificial intelligence that would think and act like us humans, but that is a story for another time (or blog post).

sign up to get an email every so often about what's new.
Thanks!
Oops! Something went wrong.